Working in the field for GET-LDC 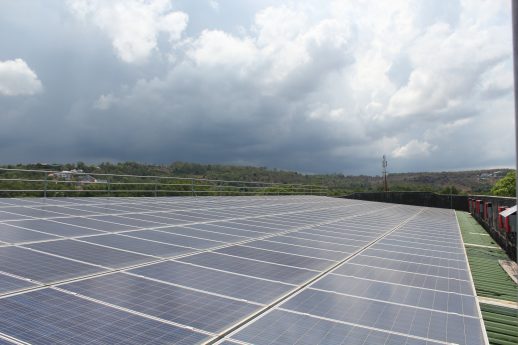 In Cambodia, the electrification rate was only 31 per cent of population in 2015 (energypedia.info), restricting energy access from the majority of rural population. Simultaneously, the price for electricity provided by the national utility company Electricité du Cambodge (EdC) is the highest in the region. Consequently, diesel generators are widely used along with biomass and fuelwood to supplement the rural energy needs. In the urban areas, energy is largely produced with large coal power plants with imported coal, or hydropower.

Cambodia has massive potential in increasing the utilization of renewable energy sources such as solar energy, yet the assessment in MoE is still under way on how to jump start the green growth approach particularly in the energy sector. Currently the lack of feed in tariffs and subsidies, and minimal prices for selling into the grid are hindering the utilization of small scale renewable energy production. On the other hand, there is a strong push for further developing large scale hydro and coal power plants in the country. Also the Rural Electrification Strategy (RES) aims to provide electricity access to all Cambodians on the village level by 2020, either through grid extension (70% of villages by 2020) or other sources, such as solar applications. Cambodia could leapfrog into the forefront of sustainable energy production, but it is up to the national policy making which path they choose. Ms. Stenholm and Ms. Tanskanen in the Sre Chea Commune, where the Solar Powered Drinking Water project was conducted.

In Laos the team met with United Nations Development Programme (UNDP) and its Environment & Energy Unit, the current Resident Coordinator Ms. Kaarina Immonen, National University of Laos (NUOL), and Berkeley University project team looking into economic modelling of large scale hydropower. In Bangkok the team also had a meeting with United Nations Environment Programme (UNEP). In Laos, national rate is up to 90%, with the government target of 94 per cent by 2020 (UNDP). Laos has significant hydro power potential due to its mountainous terrain and central location in the Mekong basin, and thus large scale hydro provides up to 99% energy resources in the country. Laos also exports electricity to neighboring Thailand, Vietnam and China. Currently the limited access is located in the mountainous rural communities, where electrification is an expensive investment. Alternative sources could be, for example, sustainable use of biomass and agricultural residues. The National Economic Research Institute (NERI) is currently drafting a Green Growth Strategy for Laos with technical assistance provided by the World Bank and the Global Green Growth Institute (GGGI). The implementation should start already in September should WB provide the funding.

The work continues with survey data analysis, interview analysis and policy document analysis. The team wishes to conduct further stakeholder interviews sometime in the winter or spring, and also organize a stakeholder discussion events in both countries. GET-LDC project has funding up until 2018 from the Academy of Finland.