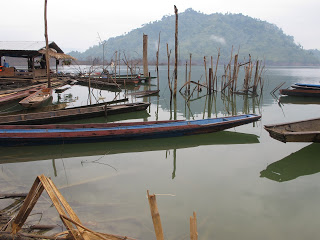 The atmosphere was excited
and somewhat anxious on February 21, when we first landed on hot and
sunny Vientiane. Still the mission of our trip was clear in our
heads. After spending a good part of the winter familiarising
ourselves with the focus group discussions already collected in the
FFRC’s INES project, we had now come to Laos for a month to gather
further data for our Master’s theses. The theses are written as part
of the INES project and, in line with its objectives, they address
the interlinkages between energy and livelihoods. More specifically,
one concentrates on the adaptation and resilience of livelihoods
towards environmental changes, considering also whether access to
electricity can enhance adaptation capacity. As for the other, it
examines how electricity is adapted as part of people’s energy and
livelihood related knowledge system. To help us answer these
questions, we interviewed experts from several organizations and
conducted a week of fieldwork in the rural district of Fuang in
Vientiane Province, a 3-hour ride from the nation’s capital.

During the fieldwork we
visited five villages within a 20 km radius of the district capital
where we stayed. Two of them were located along the river Nam Lik and
were affected by a nearby dam. In the third village lived
people who were resettled there after Nam Ngum II dam project forced them to leave their previous
homes. The last two villages were
located in the mountains and were inhabited by Hmongs, one of the
numerous ethnic minorities in Laos. On our field trip we were
accompanied by Mr. Saithong Phommavong, who served not only as an
interpreter but also as an invaluable guide to the region.
In each of the villages
four interview sessions were arranged: one with the village head man,
one with a focus group of 4–6 persons and two with individuals of
different backgrounds. The themes of the interviews were livelihoods,
environmental change, energy and future development. The interviewees
were reached through the village head man and a district official,
who chose suitable people according to our criteria. We were
particularly interested in hearing the views of women and people who
defined their livelihood as poor or sufficient. In addition to
interviewing, data was gathered through ethnographic observation.
Though the data we collected in
the villages is waiting to be analysed in detail, some
observations can already be stated. Concerning environmental change, we noted that the Nam Lik dam had not affected
people’s livelihoods as extensively as we expected. Still the
quality of the water had deteriorated and it could not be used for
bathing or household purposes anymore. The smell of the water was
striking. The quality of fish was worse, too. Moreover, most of the
villages had already experienced frequent unseasonal weather
conditions in past years and were worried about storms. In the
resettlement village we also saw some of the effects that
environmental change in the form of a major dam project can have on
people’s lives. Some people had adapted their occupations to the
new conditions but others trying to go on with only rice cultivation
were more unfortunate.
Regarding energy and
livelihoods, all of the villages we visited were connected to a grid.
Even the poorest in the villages had access to electricity. If they
did not have their own meter, they shared one with their neighbour.
From the livelihood point of view, electricity proved to be most
widely utilised in activities located at home, such as in weaving and
in cooking. We did, however, also come across some less popular but interesting uses of electricity, such as fish raising. The
most common service provided by electricity was, by far, lighting.

All in all, the fieldwork
was an educating experience. We got to explore rural Laos, gain new insights on our research themes and
learn research skills that can only be acquired through practice. We
are truly grateful to FFRC and especially the Mekong team for
providing us with this wonderful opportunity. Last but not least, we
would like to thank all the people we met during our fieldwork for the kindness that they received us with.