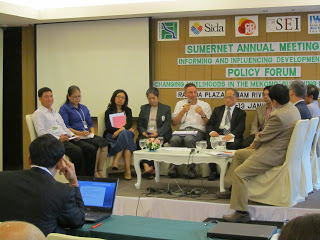 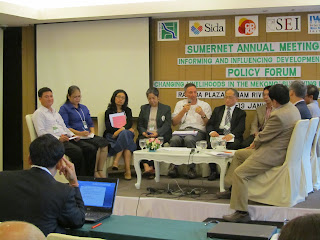 The Sustainable Mekong Research Network (SUMERNET) is a programme funded by Swedish government that intends to build a long-term research network that informs and influences policy development on sustainable development issues in the Mekong region. The program was launched in 2005 and it is now in its second phase (2010-2012).

At the time when the program was established there was a generally acknowledged gap between the pro-development perspectives of governments in the Mekong region which were often supported by multilateral donor organisations and fuelled by trade liberalisation, and the perspectives of NGO campaigners, in many cases representing local resistance to specific development projects. Many development agencies voiced their concern that an integrated approach was needed, for a greater diversity of perspectives on development to be incorporated in regional planning and policy. SUMERNET was established to support and promote the use of scientific evidence in policy making, and thus contribute to sustainable development.

SUMERNET held its annual meeting in Bangkok 11-13 January, 2012, where also Finland Futures Research Centre was present, even though it is not formally a member of SUMERNET. The meeting focused on research that is informing and influencing development policy and planning in the Mekong region. In the research partner meeting the researchers, boundary partners and other stakeholders of SUMERNET’s 10 on-going research projects shared information on a number of critical development challenges in the Mekong region. The research projects fall under 5 research themes; Ecosystem services, Trans-boundary issues, Energy & climate change, Poverty and livelihoods, and Urbanisation. These research projects are being implemented by almost 30 national teams, comprising nearly 100 researchers across the Mekong region and Southeast Asia. They are under different stage of implementation but all are to be completed by the end of 2012.

For more details on SUMERNET and the research projects, please visit http://www.sumernet.org/