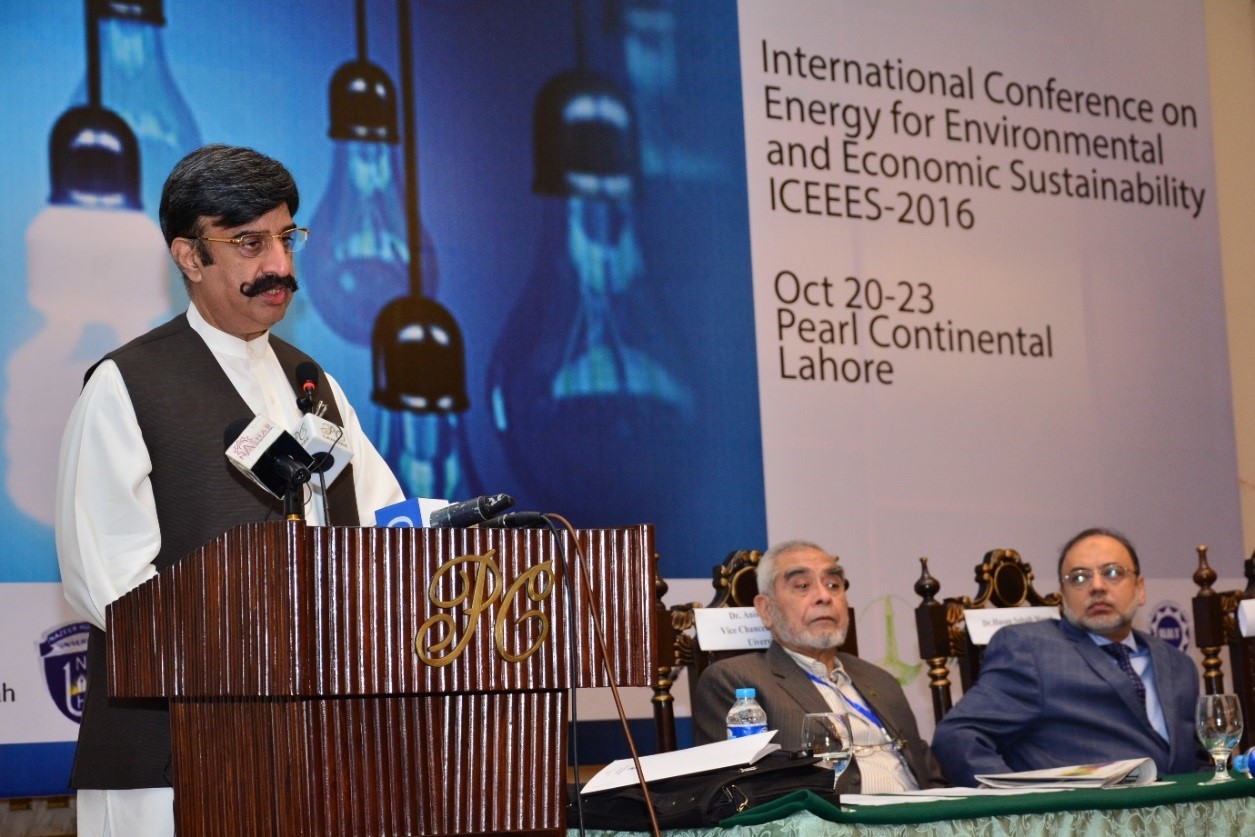 Lahore Pakistan was the venue of ’ICEEES 2016’ the International Conference on Energy of Economic and Environmental Sustainability from the 20th to the 23rd of October, 2016. Convened by Prof. Arfin Lodhi of the University of Management and Technology Lahore and Texas Tech University, the conference showcased cutting-edge national research from Pakistan in the energy and sustainability fields, from novel ocean technologies to solar thermal and biogas production. Numerous international contributors completed more than 150 papers presented at the conference. Tadhg O Mahony of the FFRC was invited to give keynote and plenary addresses at the conference on recommendation of Jyrki Luukkanen of the FFRC.

The keynote was entitled ‘Grasping the rose and not the thorns: the place of technology in a sustainable low carbon transition,’ focussing on the place of technology, this address was taken from an upcoming book on low carbon transition to be published by MacMillan in 2017 (Kirby and O Mahony). The plenary address was entitled ‘Seeking wellbeing in the pathway of low carbon transition,’ one of the outputs from the MAXWELL project. The plenary address was debated for its discussion of the different merits of consumption, the importance of poverty and inequality, the differentiated responsibilities between developed and developing countries and the development needs of countries such as Pakistan. Tadhg responded to these issue by flagging up the inescapable equity and development dimensions, and the necessity to prioritise the over-consumption of the industrialised world rather than the under-consumption in less affluent nations. With many different dimensions to the consumption challenge, there are numerous considerations that require inclusion for a just, equitable and effective engagement with the problem of rising global consumption levels, and the increasing greenhouse gas emissions that are associated w ith them.

The keynote address was of particular interest at the conference with a feature dedicated to it in the 22nd of October edition of the Pakistan’s national newspaper, the ‘Express Tribune’. The conference was dominated by scientific and engineering research, yet numerous speakers also touched on the limitations of technology and the necessity for other approaches and frames. The keynote addressed the need for a development perspective and sustainable development ‘SD’ pathways in achieving a low carbon transition, a point frequently noted in the literature, but rarely expanded upon, and almost entirely absent from policy development. The need to consider SD pathways was debated by participants pointing to a pressing need for economic development in Pakistan today. Tadhg responded by acknowledging this important point, stressing that there are development win-wins that can be achieved. Rather than following the problematic pathways familiar to developed countries much of the environmental, social and economic costs that these involved can be avoided through sustainable development pathways where integrated visions are developed and implemented.

The inaugural ICEEES 2016 conference was a testament to the famed welcome of the Pakistani people, and to the hard-work of the organising committee and local team in Lahore over a packed four day schedule. Special thanks to Prof. Lodhi for his boundless energy and his gracious invitation and hard work, and also to Hafsa Waheed of UMT for her skills in coordination and special care of the visitors from outside Pakistan. Sher Ali Khan, Minister of Mines and Minerals of the Provincial Assembly of the Punjab speaks at ICEEES 2016 (Photo courtesy UMT) This project has received funding from the European Union’s Horizon 2020 research and innovation programme under the Marie Sklodowska-Curie grant agreement No 657865.