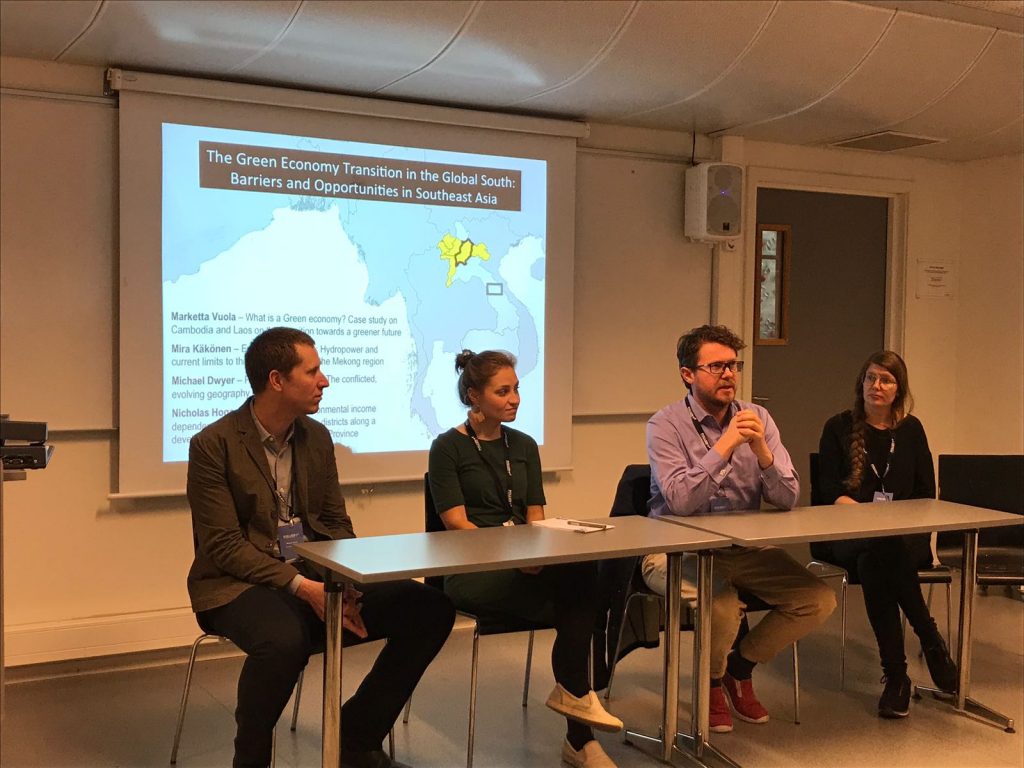 The second Biennial Conference of the Political Ecology Network titled POLLEN18: Political Ecology, the Green Economy, and Alternative Sustainabilities was held at the Oslo Metropolitan University on 20-22nd of June 2018. The three-day event was filled with fascinating talks and discussions, inspiring key note speeches from Paige West (Barnard College and Columbia University, USA), Ashish Kothari (Kalpavriksh, India), and Tania Murray Li (University of Toronto, Canada). Paige West opened the conference with her powerful and extremely up to date keynote speech directing our attention to the divisions of power related to gender and ethnicity that affect not only the research topics in political ecology but the academia and research practice at large. Who can have a voice in the academia and beyond, whose message counts?

Marketta Vuola (FFRC, University of Turku) – What is a Green economy? Case study on Cambodia and Laos on the transition towards a greener future
Mira Käkönen (University of Helsinki) – Enclaves as failures: Hydropower and current limits to the green economy in the Mekong region
Michael Dwyer (University of Colorado) – Painted into a corner: The conflicted, evolving geography of REDD+ in Laos
Nicholas Hogarth (University of Helsinki) – Forest and environmental income dependency in Laos: Comparing three districts along a development gradient in Luang Prabang Province

Our presentations linked a critical examination of Green Economy developments in Lao PDR and Cambodia from the national level strategies to village level natural resource dependence. We also got a closer look at the ways in which Green Economy mechanisms deal with hydropower projects in Laos and Cambodia and how the REDD+ schemes are geographically distributed in Laos. We asked whether the promise of greater environmental sustainability and social inclusiveness are realised through these initiatives. In particular the institutional history, the actors involved and power relations in which Green Economy policies evolve became a focus of interest and a lens through which we tried to make sense of what is happening. E.g. in Laos, we saw how the REDD+ projects are in fact targeted in the areas with no large scale land concessions thus focusing mainly on local community forestry/conservation initiatives which often from the government point of view can seem much less politically sensitive. The similar problem can be seen in the national level strategies; while the Green Economy targets may be neatly included in the national plans with priority activities on selected sectors, the question remains whether any extractive industrial activities are removed from the agendas in turn or do they still get the same prioritised status as always. Should we see Green Economy as just one more neoliberal development agenda and a “partial alternative” (as termed by Ashish Kothari in his inspiring keynote speech) operating within and enforcing the existing regimes and concentrations of power that have little will to change the status quo? Is there in fact any transition taking place and if yes, a transition to what? (From the left) Mike Dwyer, Marketta Vuola, Nick Hogarth and Mira Käkönen in the panel