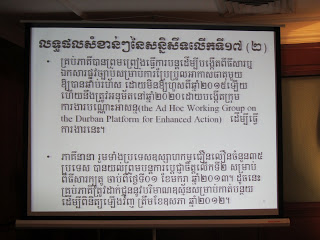 A research project Adequacy of Climate Change Mitigation Initiatives in Laos and Cambodia: Comparing Options and Analysing Obstacles in Local Context (COOL) investigated the implementation of four climate initiatives in Cambodia and Laos. The initiatives were Clean Development Mechanism (CDM), Reduction of emissions from deforestation and forest degradation (REDD), Voluntary Carbon Markets, and Energy and Environment Partnership (EEP). Dissemination of the research results were organized in Laos and Cambodia in February 2012. The second of the COOL workshops took place on the 28th of February at the Sunway Hotel in Phnom Penh, Cambodia. Registration for the event started at 7.30am!! It was organized together by the Climate Change Office of the Ministry of Environment of Cambodia and Finland Futures Research Centre’s team. It gathered a large audience as a bit more than 150 people attended the seminar. We were also honoured to have welcome remarks from H.E. Mark Gooding, Ambassador of the UK to Cambodia, on behalf of the European Union. Opening remarks were given by H.E. Dr. Mok Mareth, Senior Minister of Environment. There was a real big world feeling to the event with camera’s flashing and professional video-recorders and TV-cameras being moved around the room during the first remarks. We felt like this would probably be the first high-level event for the new logo of FFRC (check it out from the bottom of www.mekong.fi). However, as usual, our honoured guests had other commitments and had to leave after their remarks. Most of the reporters left with them. Luckily the other participants stayed, so I think they were honestly interested in what we had to say. The first half of the day consiste 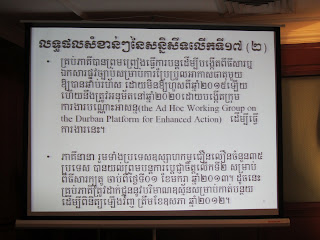 d of presentations on the CoP-17 in Durban: what had been agreed on, what was Cambodia’s position in the negotiations, how EU and Oxfam felt about the outcome, and what will happen next. However, after the lunch break our team finally got to work. Hanna Kaisti started with an overview of the COOL project, introducing the team, scope of the research, and its objectives. Try Thuon and Otto Bruun started presenting the actual case studies with a look into REDD+ in Cambodia and Laos. The topic seemed to of interest to the audience and many questions followed after their presentation. After that Visa Tuominen (that’s me) was up with a presentation on the Energy and Environment Partnership, which was followed by the last coffee break of the day. In the last session Hanna Kaisti gave her presentation on Voluntary Carbon Market’s. Even though the day had been long, interesting questions and comments were voiced. A comment from the audience pointed out that some NGOs find themselves in a difficult situation. On the other hand do 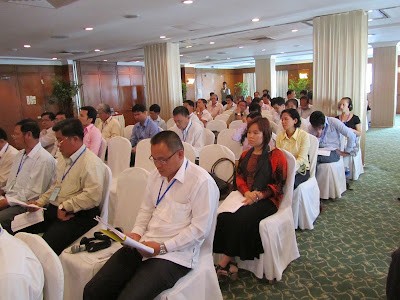 nors are not willing to provide official development assistance (ODA) for getting a certification which can bring in hundreds of thousands of euros for the organisations. But neither private investors are making the investments as they lack the tools to evaluate these kind of projects. This is not a thoroughly thought idea, only from the top of my head: perhaps financing for these kind of risk-investments, that in the best case scenario mitigate climate change while bringing sustainable development and results for poverty reduction, could be provided by multilateral development finance institutions. They have the sufficient know-how on both climate change mitigation and development cooperation. They also have knowledge on suitable finance mechanisms and funds combined with the capability to make risk-assessments on these kind of projects. And, they have the mandate both for development finance and climate finance. Still, another really interesting question is: how well do climate change mitigation and pro-poor development go hand-in-hand? But n 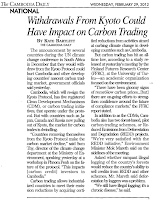 ow I’m just getting carried away. Our successful event was given a good end by Mira Käkönen’s presentation on CDM and CDM projects in the region. Overall, I have to say we did quite well. The event also managed to gain visibility in the local press. On the right you can find the story published in The Cambodian Daily. Click on the image to enlarge.
The presentations are available on our website.